There are days ... 3 1/2 half years post homecoming ... that the brokenness of our home ... of our new normal washes over me like a tidal wave. How can we still be at a place where attempts to comfort him when he is sobbing over some perceived injustice in the neighborhood are still met with, "I'm fine." and a child who pulls away from the natural comfort of a mother.

How can we still be at a place when a silly Valentine, given from a Mom to each family member, brings out contempt and disgust from your 7 year old who we traveled across the world to bring into your home. And then after throwing his Valentine in the trash, he looks at others' in the family and says, "It's just stupid." "Don't even bother looking at it.", and I am a puddle.

I remember our counselor telling us 3 months into this journey that we were in the first steps of a marathon ... that this journey was a long one. But how could we truly know that 3 1/2 years later, we would still be dealing with so many of the same basic issues from year one ... and now have school/teacher/neighborhood issues to add on top of the issues in our family that continue to make us feel like we are drowning.

I know that God gave us this child .... there were too many confirming signs all along the way to bringing him home ... bringing him into our family. I just wish I had some confidence that anything we were doing was helping ... that we were on a path that would someday bring healing to our son's deeply broken soul.
Posted by Amy at 7:27 PM No comments:
Email ThisBlogThis!Share to TwitterShare to FacebookShare to Pinterest

I stopped blogging over a year ago, because I could no longer figure out a way to share the difficult days with any sense of hope. The road seemed too long, too hard, and it felt like all I had to share would seem like complaining. We had settled into our new normal, and there was nothing encouraging to report.

I blogged for the first time last week, and took some time to read through some of my past posts. I was surprised how much I had forgotten ... from his cute toddler face, the sound of his voice and the progress of our journey from the time we got home. It made me sad that by not blogging I have missed the chance to record things that have happened in the past year or so.

Part of our story has included many of the hard aspects of RAD. Expressions of love or affection from him are in general restricted by him to the appropriate, directed moments. He hugs goodnight when we tell him it's time for hugs, Hugs grandparents good-bye because he sees everyone else do it, and when I say "I love you.", he says, "Ok". This is how it has been for 2 1/2 years.

Last night, he climbed up in my lap, and as he was snuggling in, blurted out, "I love you!"

Just three words ...  I don't want to forget this moment.
Posted by Amy at 3:15 PM 1 comment:
Email ThisBlogThis!Share to TwitterShare to FacebookShare to Pinterest 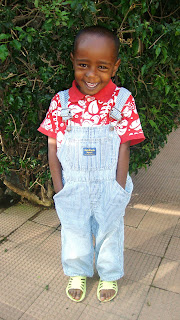 Three years ago day today we saw his face for the first time. I remember that day so clearly. Our paperwork had been in Ethiopia for 2 months, and I had just started wondering when the call would come. The call came while I was at work with my dear friend, Jennifer Bridges. I called Dave at work, and shortly after that, our coordinator called us back with the link to this picture (Isn't he cute?) and a report with the details of Kenenisa Nigatu’s story. Based on the story we had been given, we knew from the start that our journey would not be an easy one … but we believed that God was entrusting him to us, as much as our other three children had been.


Three years later … We continue on a journey that we could not have imagined. There have been so many tears. And we have wondered … how this could be the path we were being asked to walk? Our family is not what it used to be, and at this point, I would not say that it is better. However, we know that we are all being refined by our Creator. We are being asked to be more loving, more patient, more understanding, less controlling … and it is HARD!

This “referral-versary” comes at a time when we just learned that someone close to us is disrupting their adoption. That has been difficult news to process, but it has helped me remember the calling that we felt so strongly when we received this picture.

We still do not know where this journey will take us … we do not have any promises that we will see the healing that we long for this side of heaven … but Kenenisa David Elder … 3 years later, I promise you that we will not give up trying to change, grow and learn how to parent you, and learn how to help you receive and give the love you desperately long for.

Posted by Amy at 9:18 PM No comments:
Email ThisBlogThis!Share to TwitterShare to FacebookShare to Pinterest

Our church is having a Women's Retreat this week-end.

I had no plans to go.

We are currently unemployed ... and so there are no funds for things like retreats. But ...

I really WANTED to go. Not because I have some love of women's retreats in general, but because I just need a break. It's been many years since I've literally had a desire to not be home and with my family, but this past year and a half has been a bit stressful ... to say the least.

Don't get me wrong, I love my family and most days have many lovely, delightful moments. However, the constant level of stress from our youngest, newest son is exhausting. And the thought of being somewhere

... or have a 5 year old wake me up multiple times a night 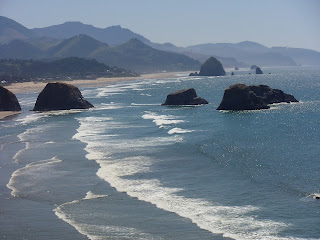 Well, DREAMY is the only word that came to mind.

But I wasn't going ... and I felt disappointed ... tried not to complain or whine about it

a dear friend of mine called out of the blue and said I was going ... expenses were paid. She'd "cleared" it with my husband ... all I had to do was get ready to go and be at her house.

and I've been packed since yesterday. :-)
Posted by Amy at 4:23 PM 3 comments:
Email ThisBlogThis!Share to TwitterShare to FacebookShare to Pinterest

His hand in mine

One of my favorite things about being a mom of little ones is the feeling of their hand in mine.

For me, it expresses trust, protection, connection ... it tells the world ... we belong together. I'm not sure I'd really thought about that until we adopted our son ...

Last week ...we were walking on a sidewalk

Baby steps on the long road of attachment.

....Grateful
Posted by Amy at 8:19 AM 4 comments:
Email ThisBlogThis!Share to TwitterShare to FacebookShare to Pinterest

I have discovered over the past year that I am not a "Yes" mom. I am definitely a "No" mom. Regardless of what is asked, I am more likely to say no than yes. This is incredibly obvious while parenting Kenen. Half the time what he asks is completely unreasonable which adds to the problem, but I find ...even when his request is perfectly acceptable, I still will no first ... without even thinking.

A case in point ... I went on the kindergarten field trip to the pumpkin patch a few weeks ago. Kenen was so excited! As we got on the school bus, he said, "Can we sit at the back of the bus?" I said, "No. Let just sit here." He was disappointed and complained a bit, but went ahead and sat where I said to. It was not till we were getting back on the bus to return to school and he asked again, that I realized how ridiculous it was to say no to that request. I was never a back of the bus girl ... was too prone to get carsick, and just put my own desires ahead of his. And more importantly, I missed out on an opportunity to join him in his excitement. 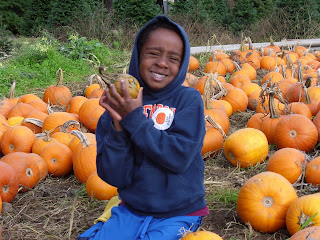 So yesterday, I was facing an entire day with him alone, since Ethan was on a field trip all day.

I decided to be a "Yes" mom for the day. I gave him some choices of things we could do, but basically decided to say yes to his desires ... It was quite difficult for me, and of course, I had to hide a few "no's" in there somewhere ... like when he asked, "Can we get this movie?" "Ummm, let's see what else they have."

It was good practice for me ... we went to McDonald's for lunch. He played in the Playland. Had ice cream for dessert. Rented a movie from Redbox. Came home and played on the computer with me. Then played Wii with me and then with Kristen till dinner. Watched a movie after dinner, and then went to bed.

So not exactly a mind growing, healthy eating sort of day ....

He asks to do all of those things almost every day.

Pretty sure, I'll be back to being a "no" mom again ...
Posted by Amy at 8:39 AM 2 comments:
Email ThisBlogThis!Share to TwitterShare to FacebookShare to Pinterest

One Year as a Family 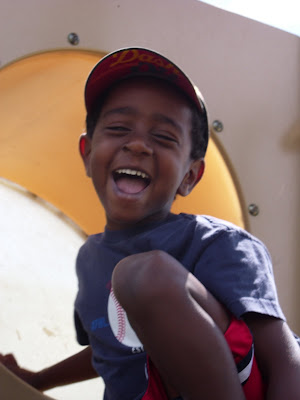 A year ago we became a family ... it has been a year of incredible change for all of us. I often think to myself what your life was like when you were still with your birth family ... the people you lived with, the countryside you explored, the experiences you had in your first 3 1/2 years that we may never know of or understand.

You have learned so many things in the past 12 months ... too many to list ... but a few worth mentioning are: how to speak English, how to swim, ride a bike, play with neighbors, eat new foods. Your survival skills and ability to adapt are truly amazing.

You are a strong, expressive, smart, energetic, fearless boy.

The rest of us have also been learning a great deal this year. We are all learning to be more patient, more compassionate, and understanding. Your dad and are trying to learn how to be more effective as parents ... learning new techniques and new skills so that we can build meaningful connections with you.

On this one year anniversary, what I want you to know more than anything is that your are safe ... that you can trust us ... that we love you - not because of what you do ... that our love is unconditional. I know that it is not your fault that you are still struggling ... but we are committed to helping you heal ... that when all those broken connections are restored ... you will see ...

We are waiting ... longingly ... for the day when you will know in your heart how much love is waiting for you.

With love in my heart,

Music that Inspires Me

"Religion that God our Father accepts as pure and faultless is this: to look after orphans and widows in their distress ..." James 1:27

*There are approximately 5 million orphans in a country less than twice the size of the state of Texas.
*Between 60-150 million kids live on the streets
*One in six children die before their fifth birthday.
*One in ten children die before their first birthday.
*Half the children in Ethiopia will never attend school; 88% will never attend secondary school
*In the 1980's one million Ethiopians died of starvation
*Some areas still practice female circumcision
*82% of the population survives on less than 1 dollar a day
*Only 24% of households have access to safe drinking water
*Ethiopia’s doctor to children ratio is 1 to 24,000
*Children and family are honored above all else
*1 in 3 people are HIV+, the average life expectancy is 37

Blogs that Inspire Me